Hold on to your horses because the fall semester is officially in overdrive. This is around the time where the social lives of students start to plummet because classes start to become more than just taking syllabus quizzes. College is the equivalent of a horror movie that’s lasted a bit too long.

Hurricane Harvey impacted Texas residents in various ways. It was a storm that put us through a variety of trials and, in the end, we were able to perceiver. When the weather channel started to talk about how impactful Harvey would be, I just thought

they were exaggerating. Heck, I even went to the gym the night before we were hit by the storm. That night at midnight, I realized this was a serious storm; the rain was pounding on my roof and there was an indoor pool in my house.

UHCL has been handling the Harvey impact in the best possible way. UHCL has offered aid and programs to students who were impacted by the storm. Even the students have gotten involved and made donations. There are always going to be events that pop out from the sky such, and it’s nice to know that a campus such as UHCL makes the students safety a top priority.

UHCL has had a variety of events these past two weeks such as the Welcome Back Bash, Student Organization Expo and movie screenings. Now I’ve been at UHCL for three years, so I know these events are chock-full of freebies! Nothing better to get the semester started off right than one or maybe 12 water bottles.

I would also like to announce that my weekly favorites are coming back next week. A weekly favorite is any TV show, restaurant, food, snack, book, etc. that I believe deserves a spotlight and a chance to be experienced by other UHCL students. Keep a look out for that!

Well that’s it for this week hawks, I hope you all have a great third week of classes. Next week I’ll be describing what senior classes are really like.

I hope you’re all safe from the chaos that was Hurricane Harvey. It’s certainly a strange way to start the school year. My heart truly goes out to everyone who’s lost anything through this storm

– be it furniture, homes, or even their pets. However, it’s inspirational to see the community come together to help one another. Lately, I’ve been very proud to call myself a Houstonian.

School started a whole week late (as you all well know), so I didn’t know what to expect. It seemed as though we truly hit the ground running this time. There was no “syllabus week” this semester. It was definitely something my friends had warned me would happen, so I tried my best to prepare during my w

eek off.  Thankfully, there wasn’t any damage where I was, but I was pretty much just stuck indoors for a week. We still had power, so I basically spent that time either binge-watching “Game of Thrones”, printing syllabi, or sleeping for hours on end.

Coming back to school and having so many responsibilities all at once is definitely a shock to my system. I’m currently taking six classes (three lectures and three labs), a peer mentor for Learning Frameworks, a peer mentor for the Hawk Leadership Institute and the president of the Social Justice Organization. It might not sound like a lot, but it sure feels like it.

I’ve started this semester with a planner and hopefully I’ll finish with it too. I’ve never used a planner, so we’ll see how this will go.  Right now it’s already full of so many scribbles and due dates! Wish me luck.

Until next time, Hawks!

Meet Natalia and Eric - they are your freshmen bloggers! As they are blogging their experience, join them in the journey! 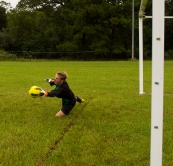